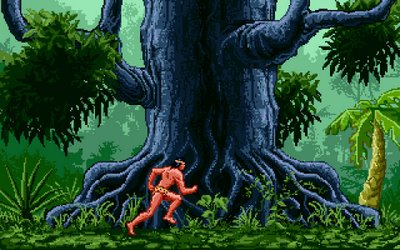 This screenshot is from an unreleased Tarzan game for the SNES. Manley was developing it for the now-defunct publisher GameTek. This image probably dates from late 1993. The Tarzan character was done by Jim Bradrick, a highly skilled classical animator and master chili chef. Jim turned me on to the music of Django Reinhardt during this project, which would later have a big impact on Voodoo Vince.

The background, including the strange blue tree, are mine. This was probably near the ultimate saturation point for 16-bit sidescrollers. I think publishers were shoveling any character with limbs into a sidescroller (and some without).

The project was pretty close to content complete when it was canned. We had stumbled along for a good five months without any real design, apart from what the artists and programmers cobbled together on the fly. The game's cancellation may have been related to the way good ol' Tarzan methodically slaughters his way through the endangered species list over the course of the game. The fact that doing so wasn't even fun just sealed the deal.

This is a sort of interesting halfway point in the look of 16-bit tile based games. Lots of games still had little tiles... a "chicklet" look to their backgrounds. The limits of the NES were still embedded in how many developers worked. But games started to appear with a more thoughtful approach to how tilesets could be used. Lush, rotoscoped games like Flashback and even Disney's Jungle Book got a lot of developers thinking differently about tile graphics and animation. I was shamelessly ripping off Flashback with the background foliage here.

Just a year or two later, games like Earthworm Jim and Donkey Kong Country would take tile graphics even further, just in time to see the platform give way to the first generation of 3D consoles. As usual, developers start getting the best from a piece of hardware right before its trip to the scrapyard.

do you have any copies of that game? i collect snes, i would love to play it.

Nope. I'd love to see it again, but I seriously doubt that any copies exist.

If you could get a hold of a ROM of the game, or anything of that sort, it would be an awesome contribution to those of us that are looking for new 16-bit games. The screenshot looks beautiful by the way. I love your background. Reminds me of Super Metroid. There's a coloring style tht was used a lot in that time frame that I miss a lot.

I'm sorry to say I don't have a ROM of Tarzan - Not sure who does. I'll keep an eye out, though.

I may post some other stills at some point in the future.